Meet the maker behind the bag! Peter Andrews, winner of our July 2020 Make of the Month prize, kindly took some time out of his busy day to tell us a bit more about himself and his bagmaking journey! 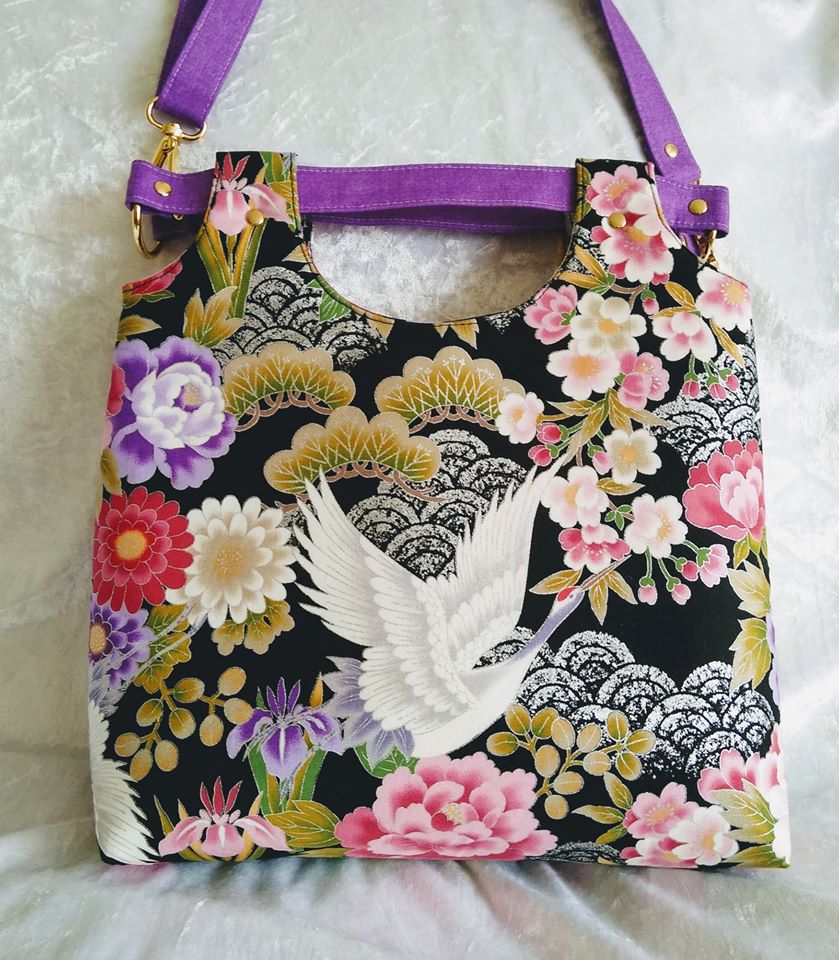 Hi Peter! We'd love to get to know the maker behind the bag better, so could you please tell us a bit about yourself?

Hello, I’m Peter and live in Arnold, Nottingham and I have been married to my wife Jackie for 43 years, and I have three sons, Richard, Christopher and Ian. All are married and have their own children, so I am grandad to four grandchildren, two girls and two boys.

We were wondering... when did you start sewing, and what inspired you to sew bags?

I have only been sewing for a few years. I was made redundant from an office job in 2012 and immediately decided that I didn’t want to work in an office anymore. Jackie had been trading at art and craft fairs selling fantasy figurines such as fairies, dragons, skeletons and reapers. So, we decided that I would also trade at art and craft fairs, but the question was what to sell.

After much thought I decided to make leather belts and sell leather goods. I enrolled on a belt making course in London. I was shown how to make belts and this was the first time I encountered a sewing machine. I didn’t use the sewing machine on the course as I didn’t want to mess up the belts I had made, but I did buy a second-hand Seiko cylinder arm walking foot sewing machine. My original plan was to work from home but realised I needed a large cutting table to cut the belt straps from the leather hides and I decided to rent a workshop.

Once the workshop was set up, I began making belts. I cut the belt straps from the hides, then cut them to the right length. I then wanted to add a line of decorative stitching round the entire length of the belt. I don’t mind saying that I was extremely nervous when I switched on the machine, placed the strap on the cylinder arm and pressed the foot pedal to start sewing. The machine started stitching and it was fine going down the straight edge of the belt but a different matter when I had to navigate round the end of the belt. It took several attempts before I got the knack of going round the end.

I also decided to make some leather bags and to help I bought a second industrial sewing machine this time a flatbed walking foot. After several years making belts I decided that I wasn’t selling enough to justify the workshop so it had to go and I decided I would continue making items at home but not belts.

In February 2019 Jackie and I had booked a two-day craft fair at Lichfield, however the organisers of the craft fair cancelled the event several weeks before it was due to take place. Rather than lose the money on the hotel I checked to see what was on at the NEC and it was the CHSI Stitches Show so we registered to attend. Walking round the event we came across an exhibitor selling sewing patterns for bags so stopped to have a look and we met Samantha and Lynne.

We talked for a while and looked at the bags and patterns on show. Jackie and I decided I would buy some of the patterns and make fabric bags at home. Lynne then talked about the Bag Retreats that Samantha runs so the first thing I did on returning home was to enrol on the April midweek retreat. I had a great time at the first Bag Retreat that on returning home I booked the October mid-week retreat. Since that first retreat I have been hooked on bag making. 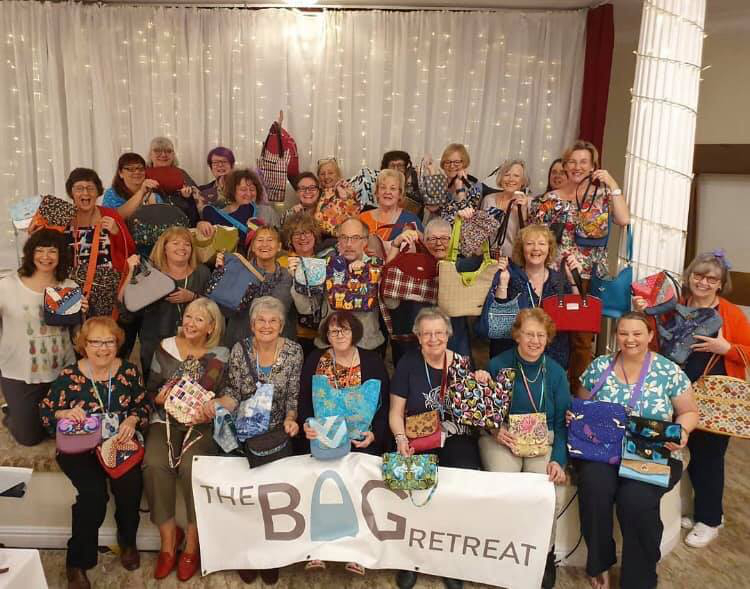 At The Bag Retreat!

What's your favourite thing about sewing?

Starting with a piece of material and ending up with a finished bag. My least favourite part is the actual cutting out of the fabric.

We totally agree! It's wonderful creating something amazing out of fabric and bits of shiny metal! With your Loopy Lou Bag, did you have a particular creative idea or inspiration for it? If so, what inspired you?

I like the Loopy Lou as a pattern, it wasn’t the first Mrs H pattern that I had made, that was the Fiesta Tote, but it was the first bag I made at my first Bag Retreat. When I saw the crane on the Japanese fabric that I had bought I felt this would look great on the Loopy Lou especially with the matching purple strap and handles that picked out the purple in the flowers. 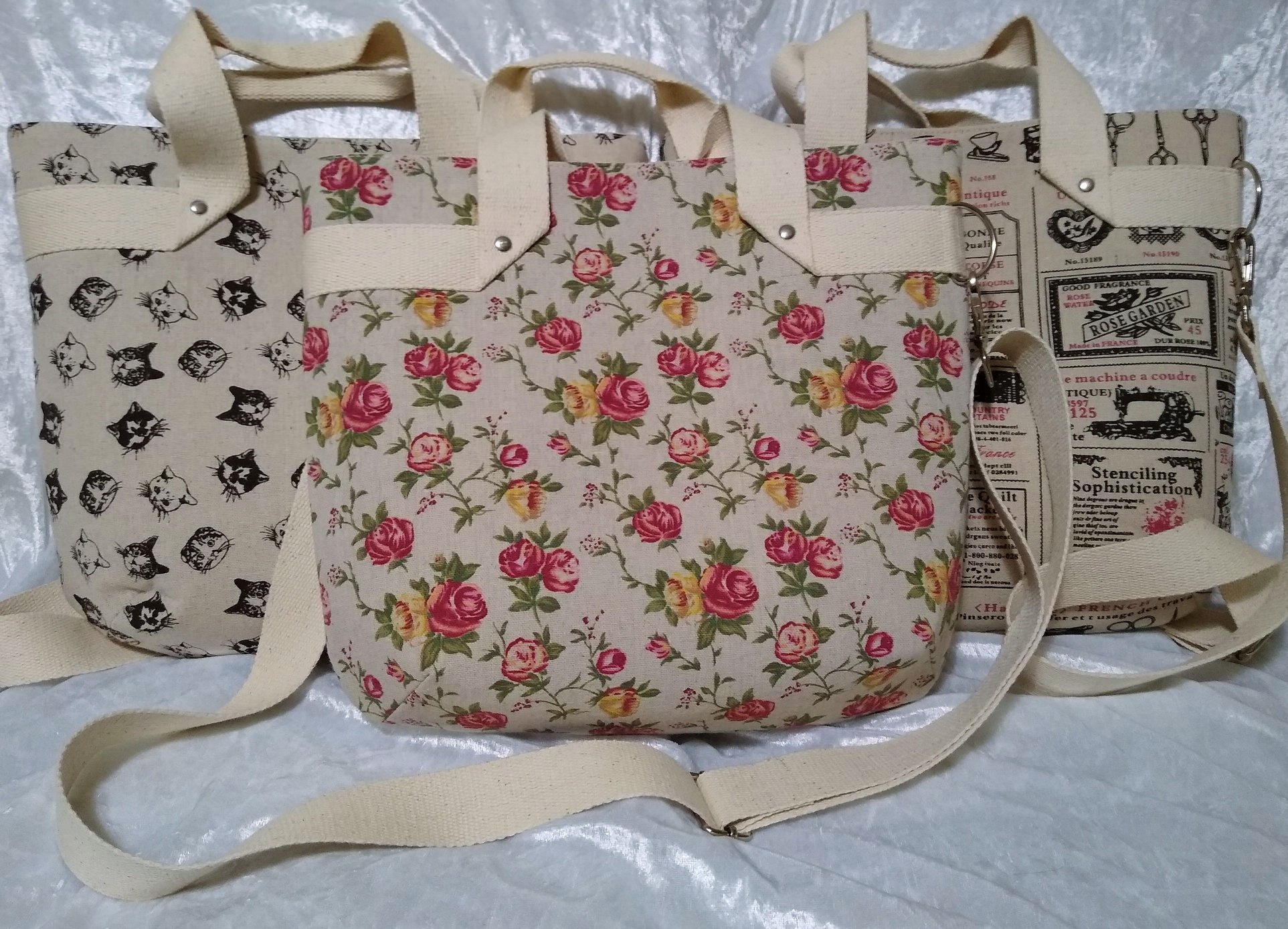 Your Loopy Lou looks great! We think your fabric placement was spot on! What will you sew next?

The Duffel Backpack from the Bag of the Month although I might not get it finished before the end of August as I have other bags cut out ready for making.

What type of sewing machine or machines do you use?

I have a Husqvana Opal sewing machine and I have kept the industrial flatbed walking foot from the workshop. I sold my cylinder arm walking foot and now realise that I should have kept that and sold the flatbed as it would have made things so much easier.

I don't really have a favourite sewing tool. I do however love to sew fabrics rather than leather. I found that when I made a mistake sewing leather, the needle makes holes in the leather which you can’t always cover up, so it means replacing the piece of leather. With fabrics they are more forgiving if I make a mistake, I can unpick it and start again. 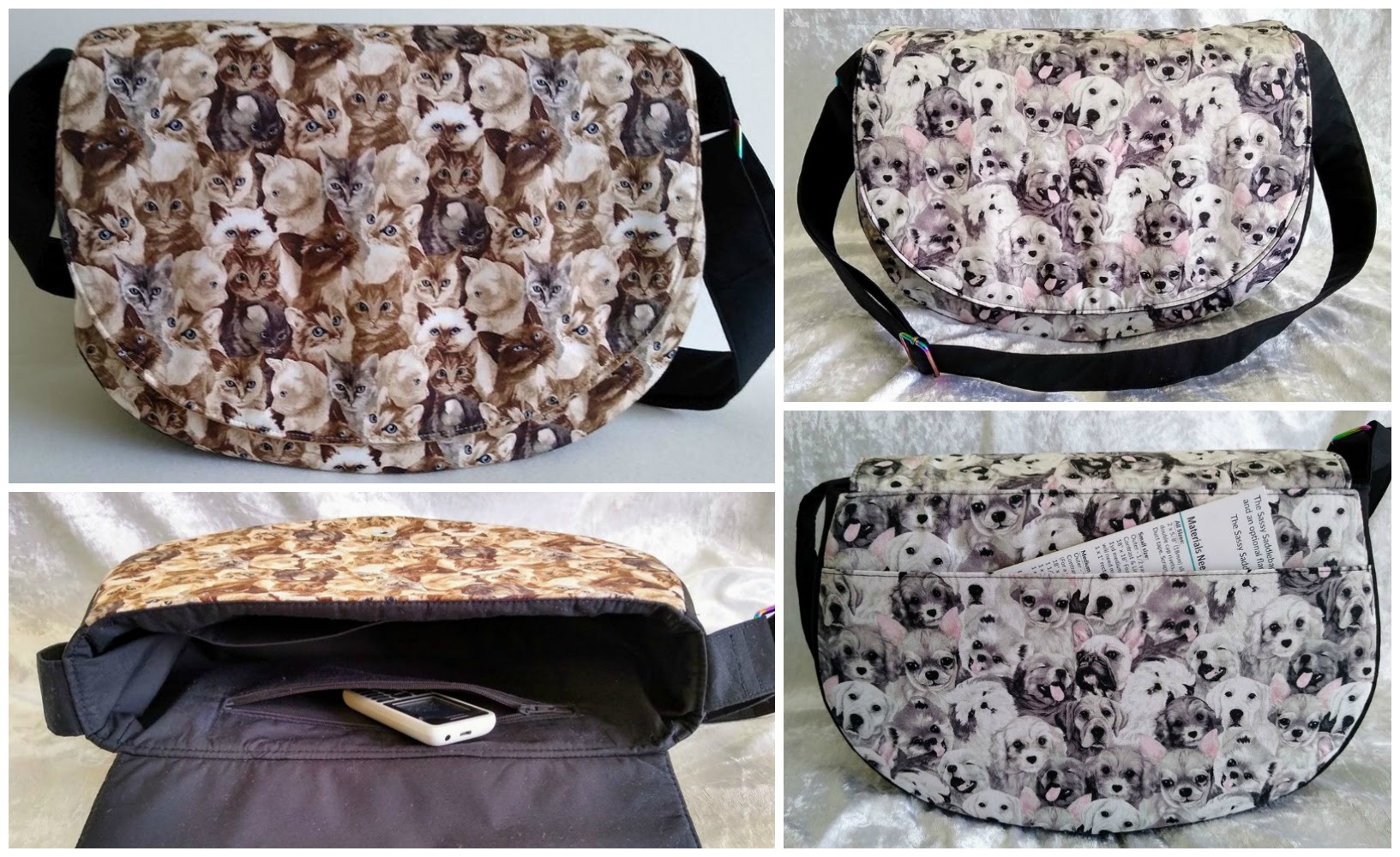 Are you more of a cat person or a dog person? Either way, Peter's got a Sassy Saddlebag for you!

What's your top tip for other bagineers?

I don't think I have been making bags long enough to give tips to other bagineers but when I start a new bag, I cut out the pattern pieces and I always make cardboard copies. I then use the cardboard patterns to cut out the fabric and I can reuse them time and again.

Excellent tip! If you could ask our bagineer followers anything, what would you like to know?

What time saving techniques do the bagineers use to speed up their bag making.

Good question! We'll pop a thread up in our Facebook group about this! Speaking of social media, do you have a business page or Instagram page where people can follow you? 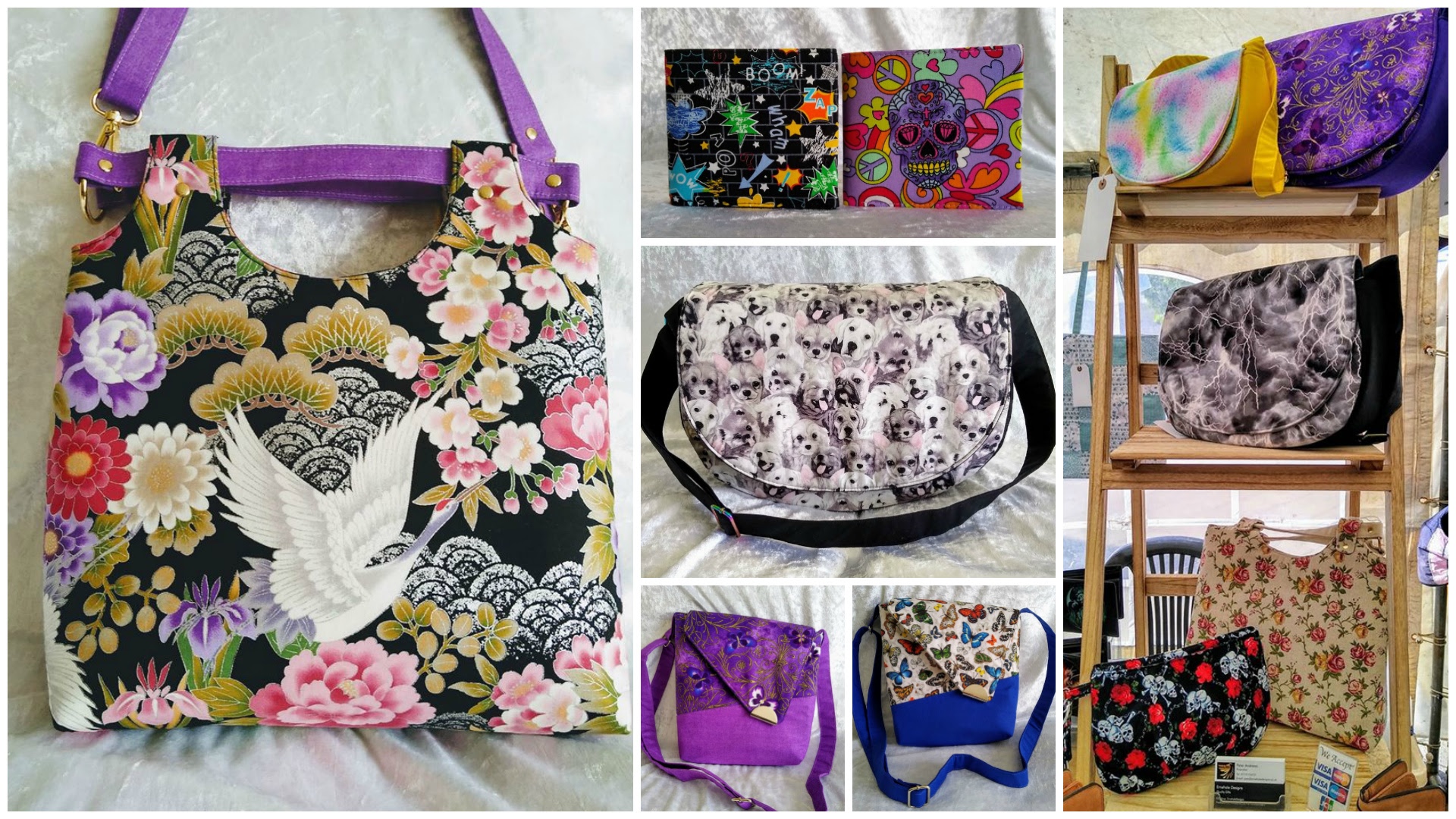 A selection of bags made by Peter of Ernehale Designs

Thank you so much for taking the time to answer our questions, Peter! We're looking forward to seeing what you make next!

Would you like the chance to win a PDF sewing pattern of your choice from our catalogue here at Sewing Patterns by Mrs H? Enter our Make of the Month photo competition by posting a photograph of your Mrs H make in our Facebook group, or tag us in your Instagram post with the hashtag #MrsHPhotoComp . We'll be choosing our favourite August make at the beginning of September!