Posted in Guests and Interviews Inspiration   |   By

As you've no doubt already seen on Facebook and Instagram, our most recent winner of Make of the Month is Cheryl Wilson, with her stunning Ring Sling Bag!

We were wowed by Cheryl's reflective photo, as well as loving the quality of her make. We particularly love the contrast top stitching, and that little peek of colour from the interior zip pocket! So much fun! 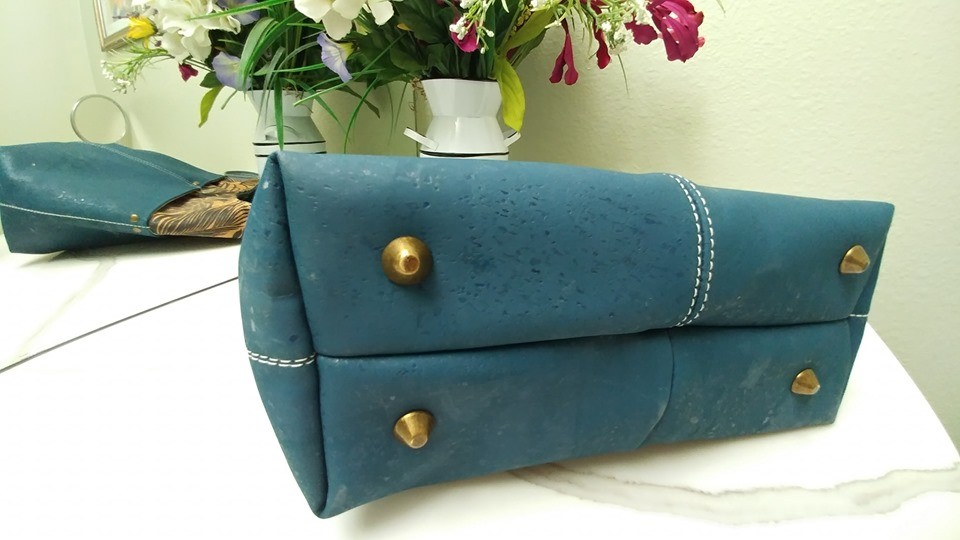 Cheryl told us that she used an all cork exterior and a waterproof canvas lining for her make. She used 1 1/2 inch rings, found on Etsy, and added a magnetic snap as she had a bit of trouble with the zipper.

Make your own Ring Sling bag, by buying our beginner-level sewing pattern from https://www.mrs-h.com/the-ring-sling-pattern.html

We reached out to Cheryl to ask whether we could interview her about her make and about her sewing life, and she said yes! Read on to find out more about Cheryl and read some of her top tips for bagmaking!

Hi, Cheryl! Could you please tell us a bit about yourself?

I learned to sew when I was in 7th grade. My grandmother sewed and so did my aunt. They were really the only people I knew who sewed. My grandmother was my mentor. When I was little she made my clothes, when she got older, (much older) I made her clothes. Also, fun fact, my mother was pregnant when I was in high school with my youngest brother. I made her maternity clothes ??! I also made my children’s clothes when they were little.

I have two kids, 36 and 39. I went back to work when they were in preschool. I started out as a tax accountant, then became a middle school math teacher so I could be home more with them. I had to retire when a surgery I had on my hip had a bad outcome with nerve damage. After at least 5 years of surgeries and rehab, I came back to sewing and decided to try making a bag. I really didn’t know what I was doing, but I just followed the pattern and was thrilled with the results. I felt like I really accomplished something as opposed to doing a quick sew of some clothing.

I sewed another bag and then I found the Bag of the Month Club. It was such a great way to try other designers and tackle something I would not have tried. Also, I learned so much about different sewing techniques because each designer had their own way of doing things and writing patterns for that matter.

So, what inspired you to start sewing? And, what is your favourite thing about sewing?

I am not sure what really inspired me to take up sewing, because I was definitely in the minority of people I knew. I was immediately taken with the fact I could create something out of just a piece of fabric. My dad bought my first sewing machine when I was in high school and I actually taught him a bit about how to sew with it - haha!

Did you have a particular creative idea or inspiration for your Ring Sling bag? If so, what inspired you?

For my first Ring Sling, I used marine vinyl, I loved the practicality of the bag with all the pockets, and the creativity of the design piecing together. But the marine vinyl made the bag a bit heavy for me so I decided to use cork. The hardest part about using cork, was all the different color choices. I decided to make this bag for my daughter. As a crossbody bag, i knew it would be perfect for her getting kids in and out of car seats and she would be free to hold little hands.

What type of machine or machines do you use?

When I started doing more serious bag making I knew I had to upgrade to a heavier duty machine. I had no idea there was such a thing as an industrial machine, so I looked for a machine with a larger throat and a presser foot that could accommodate thicker materials. I purchased a Janome 3160 QDC. It is extremely reliable, but I still had some trouble with nice even stitches when topstitching. As I continued to sew, I started making more and more bags, wallets, etc out of cork. My skills were getting better, but the topstitching was just ok. About that time, I cut my left thumb on a shard of glass and severed the nerve and two tendons on that left thumb.

After a stint at hand rehab, I went back to sewing. My husband saw how happy I was at sewing again so he encouraged me to get a Juki 1541s. The Juki was a very steep learning curve for me, and often times I thought I was in over my head. After a few cuss words and and some tense moments, Juki and I made up and we are now friends. I love topstitching and Juki does an awesome job at it.

I guess my favorite new-ish discovery is double-sided tape for leather. I had been using just the regular doubled-sided tape from wacol, but this works great and comes in 1/4 in and 1/2 in. I also recently began using a clapper, which works great for pressing seams flat.

What's your top tip for other bagmakers?

My absolute top tip, is to not give up. Many times we get frustrated because something doesn’t work right, or fit right, or a seam is sewn sloppy or backwards. But, patience and perseverance really make a great bag. It’s also kind of like frying tacos; the first one usually is just okay, but the next several turn out great!

What are you going to make next?

Right now I am working on a line of wallets, mainly cork that have long detachable chain straps, to wear as a crossbody or just use as a wallet. I have a couple local boutiques that want to carry them so I am gearing up for Christmas.

Thank you for sharing with us, Cheryl!

Cheryl received her Ring Sling bag sewing pattern as a member of The Bag of the Month Club. The next season of the 2019 Club is now taking early bird subscriptions. The club will run from September through to November, and you can subscribe now for a discounted rate of just $15 for the three patterns. You can find out more and join our club at https://www.bagomc.com.

Would you like a chance to win a free PDF bag sewing pattern from the Sewing Patterns by Mrs H catalogue? To take part in the August Make of the Month competition all you need to do is share your Mrs H make on the Facebook group or pop it on Instagram with the hashtag #MrsHPhotoComp any time during August.