Hi lovelies,
Lots of people have asked about fusing vinyl to their fabrics to make the Toiletry Tote, so I've prepared a comparison for you of the most popular three. 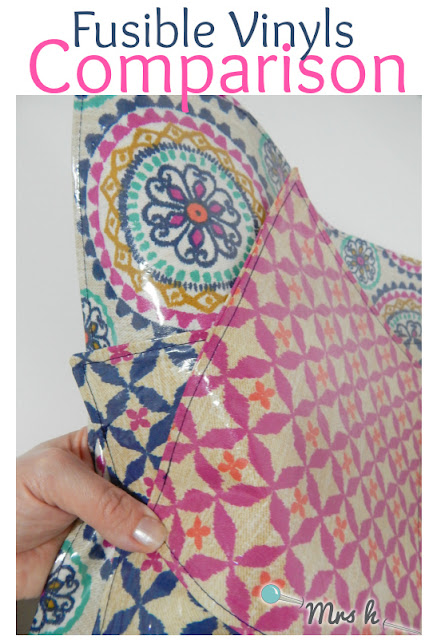 I’ve used the Gloss finish for all three. 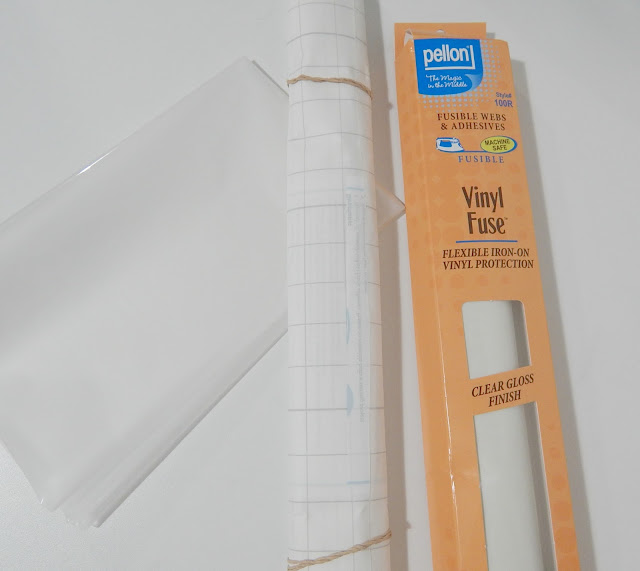 Packaging & Information
Pellon Vinyl Fuse – Comes rolled in a box, with instructions printed on the box. The roll is protected by the box and unrolled with few creases. The backing sheet did not have a grid printed on it which could have made cutting to size easier.  The instructions are clear and easy to follow. The Vinyl fuse seems to be the thicker, weightier of the three vinyls.
Heat n Bond Iron on Vinyl – Came rolled with the plastic instruction sheet wrapped around. The instructions are clear and easy to follow. The vinyl did receive some creases from the roll being flattened in the post.
Vilene Lamifix – Came folded with no instructions. The selvedge has minimal instructions printed in code. Leaving the vinyl unfolded overnight did not remove all of the folding creases, but they did not impact on the end finish. The Lamifix is the lightest weight of the three vinyls. 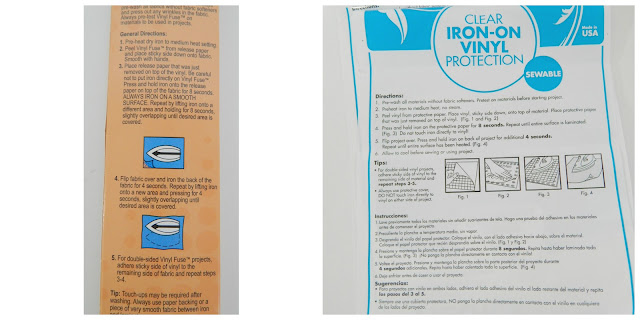 Preparing to fuse
Pellon Vinyl Fuse – The vinyl is slightly tacky once the backing sheet is removed, helping to form a light bond to the fabric for positioning. I found that it needed to be trimmed to exact size before taking to the ironing board, otherwise it would fuse to the cover.
Heat n Bond Iron on Vinyl – Again, the vinyl is slightly tacky under the backing sheet. It was easy to trim to size due to the grid printed on the back. It was easy to trim with a rotary cutter, and again, needed to be trimmed to exact size.
Vilene Lamifix – The Lamifix can be fused without being trimmed, as it can be removed from the board cover easily. However, with nothing to hold it in place it can shift a fair bit between cutting table and ironing board, and it is a bit tricky to ensure it’s flat before fusing.

Impressions after fusing
Pellon Vinyl Fuse – This was the smoothest finish after fusing, resulting in a weighty fabric, that had the appearance and hand of commercially available laminated fabric.
Heat n Bond Iron on Vinyl – Whilst the steam press resulted in a smoother finish, it was still a little imperfect, but the overall adhesion was good, and resulted in a fairly weighty fabric that had a good finish.
Vilene Lamifix – The steam press finish was far superior to that with the iron, with the press resulting in a slightly wrinkled finish, and the iron resulting in a very wrinkled, and somewhat disappointing finish. The vinyl didn’t feel securely adhered, and after cooling, the edges separated slightly from the fabric.

Waterproofing properties
All three performed incredibly well at repelling water, with droplets beading on the surface and brushing off easily. None of them allowed water to seep through, even after an hour.

Sewing the laminated fabrics
All three sewed well using a size 80 Schmetz needle. The Lamifix did try to shift slightly, but nothing too concerning.

Turning the fabrics
To replicate actual use, I sewed the laminated fabric rectangles right sides together leaving a turning gap, trimmed the corners, then turned through the turning gaps, to form waterproof placemats.

Pellon Vinyl Fuse  - The Vinyl fuse performed best when faced with creasing. The creases were minimal and the vinyl remained well adhered during turning. A quick dry press left a few creases.
Heat n Bond Iron on Vinyl – The Heat n Bond did crease when turned, feeling rough on the surface immediately after turning. It didn’t separate from the fabric. A quick dry press removed most of the creases and restored it to a smooth finish.
Vilene Lamifix – The Lamifix had minimal creasing on turning, however, sections became separated, with an almost ‘baggy’ feeling to it. A quick dry press helped this to re-set.

Final impressions
The finish on all three is perfectly acceptable, although I do have a preference on which I found the best and easiest to use. I'll always go for the Pellon Vinyl Fuse from now on!
Pellon Vinyl Fuse – For the price, I found the Vinyl fuse to be great value, with a great finish, and a nice easy experience. The product worked as expected and was hassle free. I just wish it was slightly wider on the roll for bigger bags.
Heat n Bond Iron on Vinyl – The finished fabric is well protected and with a glossy result. The slight extra creasing is not something that would be noticed, and it was easy to use.
Vilene Lamifix – The finished fabric is quite disappointing compared to the other two, but the finish is still acceptable, and the waterproofing properties well matched, as long as it's applied using a dry steam press. The process to use the Lamifix felt slightly long winded, and was not as easy as the previous two.

The fabrics used are from MICHAEL MILLER FABRICS - WOVE IT OR WEAVE IT from White Gecko Craft Lounge in Cardiff.


Samantha (aka Mrs H) is a bag pattern designer living in the South Wales valleys with her husband Dus and their unfortunately nick-named daughter, Elvis. She's been designing sewing patterns for bags since 2011, and relishes making tricky styles accessible to all. She particularly loves using pretty hardware and breaking all the usual sewing rules! You can see more of her patterns at www.mrs-h.com

posted on 3 Mar 2021 07:58:21
Hi Mrs H. I’m new to bag making and your book and tips and tutorials are great.
I was wondering, if I needed to add interfacing to the material as well, would you add it before or after (or at the same time as!) the vinyl sheet?
Thanks